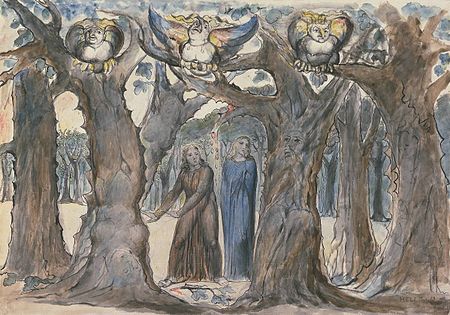 “The wise man sees a different tree from the fool.”

When you look at a tree, what do you see? Imagine that we ask this question to a class of teenagers as they near the end of their schooling. What would they say? Would Blake say that they had answered “wisely” or “foolishly”?

This piece will examine the merits of asking such questions in our schools, and what the responses might suggest about the education schools are providing. My hunch is that our class of teenagers would answer something like the following. Some would no doubt believe the question itself to be foolish but most would be eager to prove how well they had absorbed the GCSE Science curriculum. “We see… photosynthesis in action! … the lungs of our planet! …the heart of our ecosystem! …home to bugs and birds! …logs for the winter fire! …a table for dinner! … employment for timber merchants and lumberjacks.” And so on. My hunch is that few children would answer in the manner of a John Muir (“between every two pines is a doorway to a new world”) or a Coleridge or a Roger Deakin (“to enter a wood is to pass into a different world in which we ourselves are transformed”). And that this is less because they lack the means of expression than that they lack of the means of feeling.

In other words, like many who argue in favour of trees, if a teenager cares about trees today, though she may be appalled by the threats of deforestation and climate change, she will likely do so for reasons that rarely rise above the utilitarian. If this is true, it should trouble us as teachers because it means that a richer relationship with the natural world has not been disclosed to her. Children are being left blind to a relationship with trees that previous generations took for granted and which they themselves might have felt in an earlier stage of development. They are seeing in a sense half a tree; an impoverished and lifeless thing robbed of any larger meaning. And though I have chosen to write about trees, substitute almost any proper noun you care to think of: homes, horses and historical figures have been similarly cut down to size.

We might call this “richer relationship” a “participatory” relationship. Children have been denied a sense of their participation with trees. When it has been properly cultivated, perception of this participatory relationship can make the world positively pullulate with meaning. Such cultivation is by no means the only responsibility of the teacher – but it is a worthy one, and it is almost completely ignored. This short piece argues for its reconsideration.

Briefly, what do I mean by a perception of participation? Across a range of fields, in art and science, it has been shown that “the viewer partakes in the viewed.” This is expressed with different nuance and emphasis across a wide range of disciplines, but the similarity is more striking than the differences. Plato, “the virtuous man sees differently from wicked man.” Titus, “to the pure, all things are pure.” Coleridge, we “receive but what we give”. Proust, “the real voyage of discovery consists not of seeking new lands but seeing with new eyes.” Iain McGilchrist, “the type of attention we pay to a thing determines what we see.” Sam Harris, “how we pay attention to the present moment largely determines the character of our experience.” I have collected a whole file of others! Anyone who has seen Simons and Chabris’ gorilla experiment will have also been struck by its profound implications. We only seem to see what we’re expecting.

This is not to say that we each create our own world. The objective world – the table on which I write and the cup of coffee by my side – has a reality with a concreteness about which all would agree. But you do not have to be a Post-Truth relativist to say.. only up to a point. We may disagree with the exact percentages assigned by Wordsworth in Tintern Abbey (…of all the mighty world / Of eye, and ear,–both what they half create, / And what perceive…) but surely we can say that we bring something – and something important – to and into our perception. As Iain McGilchrist writes, “we neither discover an objective reality nor invent a subjective reality…there is a process of responsive evocation, the world ‘calling forth’ something in me that in turn ‘calls forth’ something in the world.”

If our perception can be participatory in theory, is there any sense in which this might be the case in practice. Let’s go back to our class of teenagers looking at the tree. To what degree might we say that they can participate with it?

It is to that training we turn now. 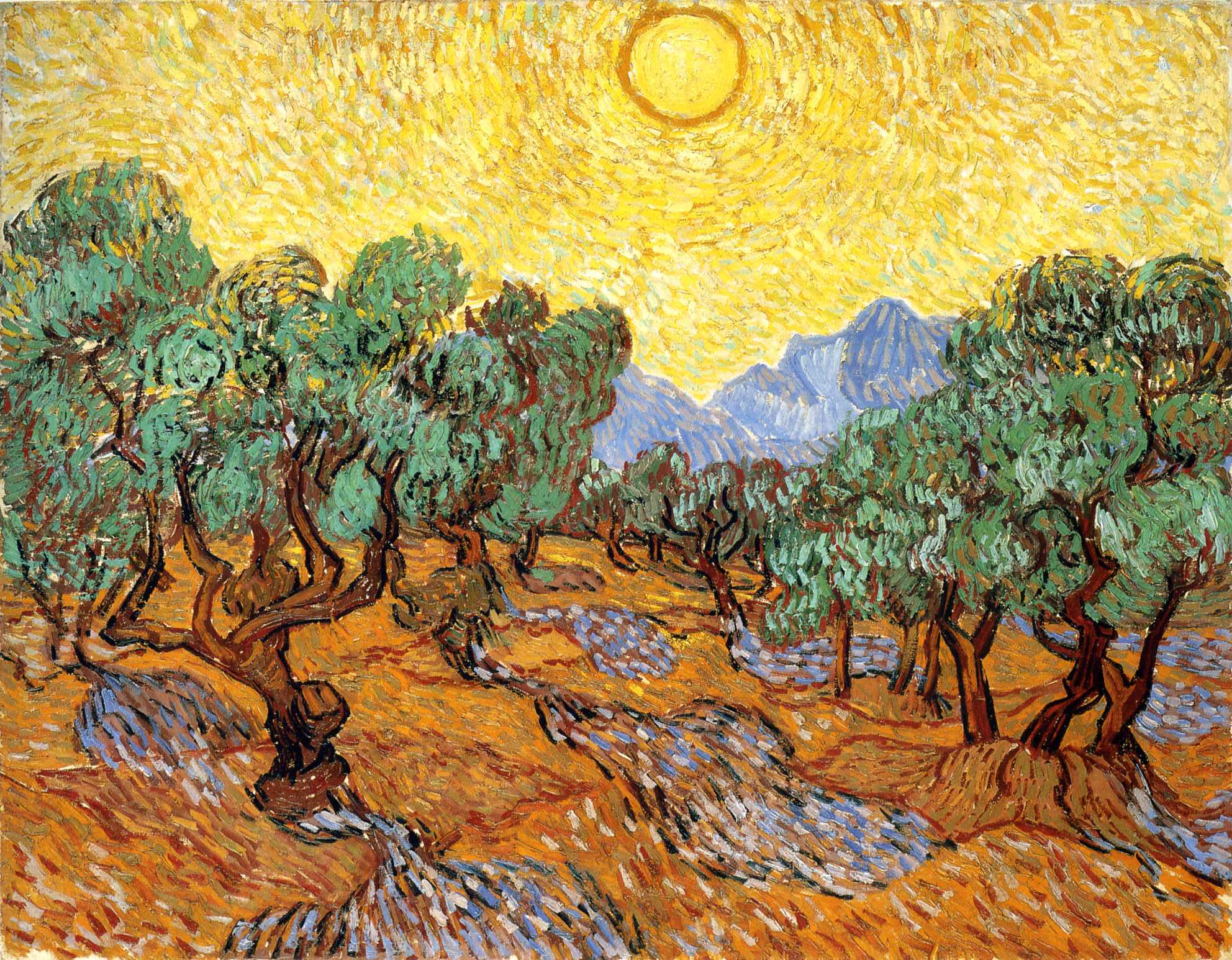 “The tree which moves some to tears of joy is in the eyes of others only a green thing that stands in the way. Some see nature all ridicule and deformity… and some scarce see nature at all. But to the eyes of the man of imagination, nature is imagination itself.”

It is said that when Whistler was learning to paint in a new style, a woman complained when looking at one of his canvasses. “Well I never saw a sunset that looked like that,” she said. To which Whistler replied, “But Madam, don’t you wish you could?”

Either we have to write off the perception of artists and naturalists through the ages as delusional or a rare fluke, or we must conclude that they had access to something that most of us miss out on because of distraction or lack of proper training. We should want children to experience the world in this more vivid way. More and more children experience the opposite – a growing alienation from the world, a growing cerebralisation whereby they become trapped in the prison of their own self-consciousness, unable to fully participate with the world. The “Shades of the prison-house begin to close /Upon the growing Boy.”

In one sense, our job is a negative one. We should be alert to what form these “shades” might take and try to prevent their encroachment. I have a particular fear of the word “only” for growing children myself, as in “You fool! That grove of trees by the edge of the park that you thought was a magical wood is only a thin line built to mark the border with the supermarket.” etc.  Picasso, “Every child is an artist. The problem is how to remain an artist after growing up.” Rousseau, “Nature wants children to be children before being men. If we want to pervert this order, we shall produce pernicious fruits which will be immature and insipid and will not be long in rotting….Childhood has its ways of seeing, thinking, and feeling which are proper to it.”

However, there are more positive jobs to do too. As teachers, we can influence what a child “brings” to his perception, even beyond the capabilities with which he has naturally been endowed. How might we do this?

Here I intend merely to point to a few directions of travel, along the paths suggested above.

We said above that a child’s powers of attention can be trained. In a world of attention deficit, it is even more important. How can teachers and parents do this?

Of course, it may be that such activities are even richer when combined. Children could for example be played Debussy’s water music – training their ears – and be asked to respond using a ranging of materials from acrylic to sand. As long as training attention is held as a priority, anything can be attempted.

“We could never have loved the earth so well if we had had no childhood in it… These familiar flowers, these well­ remembered bird­ notes, this sky, with its fitful brightness,these furrowed and grassy fields… such things as these are the mother ­tongue of our imagination.”

It was easy to characterise such lessons as mindless or rote, but it was a mistake to do so. The champagne was thrown out with the cork. It is possible for teachers to pass on such names with zest. The evolving practice of mnemonics, buffeted by the proliferation of Mind Maps and fun technology like LeafSnap and Memrise, has made this even easier.

What is required, then, is a vibrant new series of books, field guides, “knowledge organisers” and the like that can introduce vocabulary and knowledge of the natural world to a new generation. Until that point, there are plenty of old books that will do the job – and parents/teachers can of course make their own. Nouns are one thing, but it is also possible to memorise a rich and expanding store of verbs, thereby animating the world with motion. How much easier to see a tree’s leaves in detail when one sees it leaves not just waving, but trembling, quivering, rippling.

Rather than being mistaken as mindless and mechanical, Memory is rebooted in this way to its older form, a dynamic way of interacting with and of seeing the world.

With memory once again enthroned as an engine of perception, children should then be encouraged to use the contents of their memory in imaginative, “forgetive” (in Owen Barfield’s phrase) ways. Here are a few ideas, very few of them my own:

“To speak truly, few adult persons can see nature. Most persons do not see the sun. At least they have a very superficial seeing. The sun illuminates only the eye of the man, but shines into the eye and the heart of the child. The lover of nature is he whose inward and outward senses are still truly adjusted to each other; who has retained the spirit of infancy even into the era of manhood. His intercourse with heaven and earth, becomes part of his daily food. In the presence of nature, a wild delight runs through the man, in spite of real sorrows. Nature says, — he is my creature, and maugre all his impertinent griefs, he shall be glad with me…Crossing a bare common, in snow puddles, at twilight, under a clouded sky, without having in my thoughts any occurrence of special good fortune, I have enjoyed a perfect exhilaration….Standing on the bare ground, — my head bathed by the blithe air, and uplifted into infinite space, — all mean egotism vanishes. I become a transparent eye-ball; I am nothing; I see all; the currents of the Universal Being circulate through me; I am part or particle of God. ”

We are frequently told that we live in an empirical and reductive age, in which nothing is of value unless it can be measured. I nevertheless find it interesting and encouraging that many of the innovations that have taken hold in education in recent years have been as interested in the interior as the exterior, e.g. growth mindset, mindfulness and wellbeing.

Utilitarian materialism supplies a meagre dollop of meaning to the viewed – merely the utile. But when we sit beneath a tree and feel a subliminal aesthetic calm in a way we (certainly I!) cannot put into the words, we feel the distant echo of a relationship that has too often been undernourished. If we are ever going to encourage children to see the world more richly, it will come through the enhancement of the above faculties. It might not need to happen in the classroom; it could happen in lunchtime clubs, on the weekends and in the holidays. Some such as First Hand Experiences and our Imaginarium are trying. I hope this piece has made the case for why doing so is both important and possible. Join us!